10 most celebrated architectural marvels of the modern world

There are hundreds of high-profile built structures strewn around the modern world. However, only a few attain the stature of timelessness and will remain reference points of excellence maybe 50 years or a century from now. Here is an eclectic roster of 10 incredible architectural creations of the modern world: 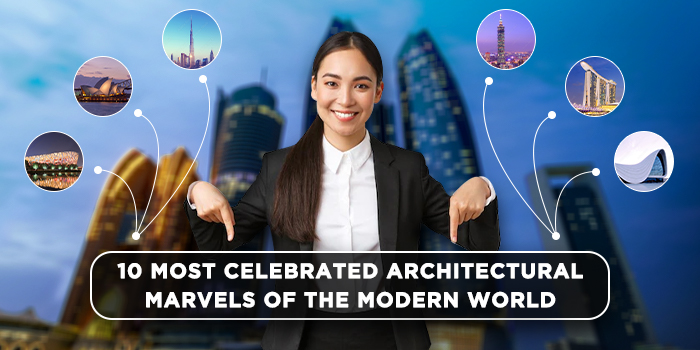 # Burj Khalifa, Dubai: The tallest artificial structure in the world designed by architect Adrian Smith, this mixed-use tower soars majestically to a dizzying height or 829.8 metres with 160 stories. Besides housing offices and high-end boutique residences, the Burj Khalifa also has the Armani Hotel Dubai and the Armani Residences on its cavernous premises. Visitors can enjoy breathtaking views of Dubai city from the Burj Khalifa SKY at the top, the world’s tallest observation deck. A standout feature is the ‘World’s Voices’ created with 196 cymbals and water cascading from the ceiling at the entrance lobby.

# Guggenheim Museum, Bilbao: A signature creation of celebrated architect Frank Gehry, this art museum in Spain is considered one of the most influential buildings in the world. There are 20 gallery rooms spread across three floors which incorporate design elements from modern to postmodern to the here and now. Such has been the magnetic attraction of the Guggenheim Museum that it has been able to draw visitors from across the world in their millions and completely turned the economy of Bilbao around, while helping reduce crime rate in the city significantly.

# The ‘Bird’s Nest’, Beijing: The National Stadium of Beijing designed by the Basel-based architecture house of Herzog and de Meuron, and constructed for the 2008 Summer Olympics, is regarded as one of the architectural wonders of today’s world. The shell or the outer structure, made of steel meshes, resembles a bird’s nest. Shopping and entertainment zones are also being incorporated into the gigantic stadium’s perimeter.

# Sydney Opera House: Designed by Danish architect Jorn Utzon and completed by an Australian architecture team headed by Peter Hall, this iconic performing arts centre at Sydney Harbour is one of the most stunning architectural creations of the contemporary world and a designated UNESCO World Heritage site. One of the most famous and recognizable buildings in the world, the Sydney Opera House also has a concert hall, playhouse and studios, a drama theatre and a proscenium theatre as well, with an average annual performance count of over 1,600 to enthrall visitors from around the world.

# Milwaukee Art Museum, Wisconsin: The critically-acclaimed design of this art museum is spread across three different buildings designed by three different architects. While the War Memorial Center was designed by the Finnish-American architect Eero Saarinen in 1957, the Kahler Building was created by David Kahler in 1975. Later in 2001, the Quadracci Pavilion was designed by celebrated Spanish architect Santiago Calatrava, a signature creation overlooking Lake Michigan and embellished with pointed arches, flying buttresses and ribbed vaults.

# The Petronas Towers, Kuala Lumpur: The landmark Petronas Towers, the tallest twin towers in the world stretching 1,483 feet into the sky, were designed by Argentine-born American architect Cesar Pelli and completed in 1998. It has since become the calling card of Malaysia and a magnet to attract tourists from around the world. The famous skybridge was added later to provide structural support to the tall towers.

# Taipei 101, Taiwan: This giant structure, soaring 508 metres into the sky with the spire, was the world’s tallest building till the Burj Khalifa stripped it of its moniker in 2010. Designed by local architecture firm C.Y. Lee & Partners and also known as the Taipei World Trade Center, this uniquely designed building has elevators zipping up and down at 60mph, propelling you from the 5th to 89th floor in 37 seconds flat! The tower has an observation deck on the 88th and 89th floors, offering spectacular views, restaurants and a shopping mall.

# Marina Bay Sands Hotel, Singapore: Conceived by the fabled architect Moshe Safdie, Marina Bay Sands, owned by Las Vegas Sands, is a super-luxury resort which housed the world’s most expensive standalone casino when it opened its doors in 2010. Apart from the 2561-room hotel, this lavish property, now the unmistakable emblem of glitzy Singapore skyline, houses a massive shopping mall, The Shoppes at Marina Bay Sands, two giant theatres, a museum, a couple of floating Crystal Pavilions exhibition space and the largest atrium casino in the world, offering 500 tables and 1,600 slot machines.

# Heydar Aliyev Center, Baku: A signature design by illustrious Iraqi-British architect Zaha Hadid, this 57,500 square metre building complex was completed in 2012 and has attained iconic stature thanks to its fluid shape and flowing curved style that avoids sharp angles. This famous building in Azerbaijan was intended to represent a reaction to the rigid, Soviet-era architectural style and a reference to Islamic calligraphy, while incorporating elements of Azeri architectural language.

# Harpa Concert Hall, Reykjavik: Designed by Danish firm Henning Larsen Architects in collaboration with Danish-Icelandic artist Olafur Eliasson, The Harpa Concert Hall in the Icelandic capital is one of the most notable architectural creations in Scandinavia. Its structure has “a steel framework clad with geometric shaped glass panels”, which produces a kaleidoscopic effect of a spectrum of different colours, which is mesmerizing. The building was originally planned as part of a plan to redevelop the Austurhofn, also referred to as the World Trade Center, Reykjavik. However, plans had to be revised following the financial crisis that hit Iceland in 2008.

Disclaimer : Information contained and transmitted by us are for information purposes only. All views and/or recommendations are those of the concerned author personally and made purely for information purposes. Nothing contained in the articles should be construed as business, legal, tax, accounting, investment or other advice or as an advertisement or promotion of any project or developer or locality. Pioneer Property Management Ltd. does not offer any such advice. No warranties, guarantees, promises and/or representations of any kind, express or implied, are given as to (a) the nature, standard, quality, reliability, accuracy or otherwise of the information and views provided in (and other contents of) the articles or (b) the suitability, applicability or otherwise of such information, views, or other contents for any personâ€™s circumstances. We shall not be liable nor shall be held responsible in any manner for any action taken based on the published information (whether in law, contract, tort, by negligence, products liability or otherwise) for any losses, injury or damage (whether direct or indirect, special, incidental or consequential) suffered by such person as a result of anyone applying the information (or any other contents) in these articles or making any investment decision on the basis of such information (or any such contents), or otherwise. The users should exercise due caution and/or seek independent advice before they make any decision or take any action on the basis of such information or other contents.