Indian real estate faces its most challenging situation as a result of policy reforms and geopolitical situation, which impacted the macroeconomic scenario to the point where the Indian economy is in the throes of an economic slowdown with subdued investment and muted consumption. The economic policy reforms have led to an operational crisis in real estate. 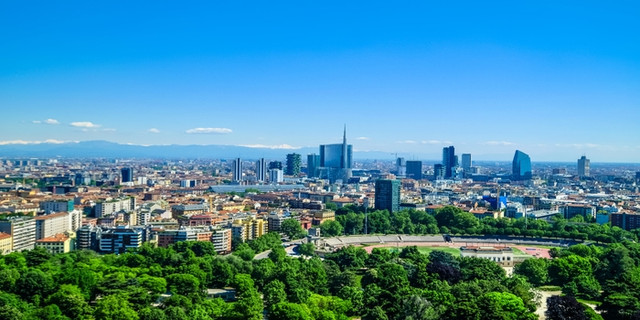 It was yet to recover from the impact of Demonetization, RERA, WB-HIRA, and GST, when housing finance companies and non-banking finance companies (NBFC) blow-out added to the woes. All these put together choked liquidity and roll over, affecting the functioning of real estate as a business. A series of short-term measures have the potential to not only bring back to life the beleaguered Indian Real Estate by giving it an opportunity to bounce back but can also lead to enhanced employment and demand generation, effectively ensuring double-digit GDP growth.

Industry leaders have been frequently flagging rising concerns, the moot point being that revival solutions if implemented correctly and in a timely manner could be a savior. Several fiscal stimulus measures such as stressed funds and corporate tax cuts have been positive moves towards healing the industry which is suffocating. It's a welcome move that the government has announced Rs. 25,000-crore stress fund, which will help to resolve homebuyers' and industry stakeholders' woes.

The following steps if implemented on an immediate basis will give a “leg-up” to the economic recovery: 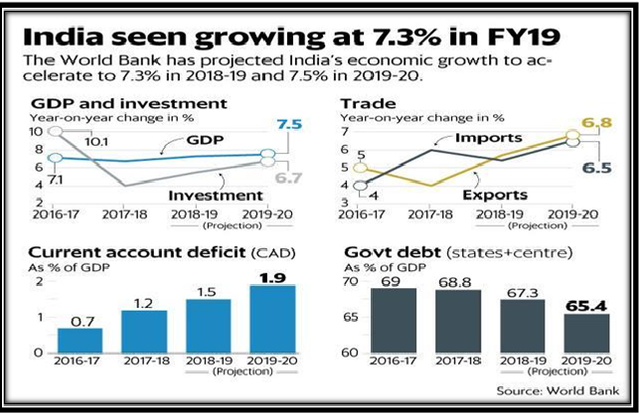 The real estate sector is one of the most globally recognized sectors. The real estate sector comprises four sub-sectors - housing, retail, hospitality, and commercial. The growth of this sector is well complemented by the growth of the corporate environment and the demand for office space as well as urban and semi-urban accommodations. The construction industry ranks third among the 14 major sectors in terms of direct, indirect and induced effects in all sectors of the economy. The real estate sector in India is expected to reach a market size of US$ 1 trillion by 2030 from US$ 120 billion in 2017 and contribute 13 percent of the country’s GDP by 2025. Retail, hospitality and commercial real estate are also growing significantly, providing the much-needed infrastructure for India's growing needs. Out of the two cornerstones in Real estate, i.e. residential housing commercial real estate; the residential housing sector has been a slow path for nearly a decade now.

- One of the biggest real estate trends of last year and a major sign of revival for the Indian property market was the increase in investments by foreign investors. An increase in India’s credibility has made it an attractive destination for global institutional investors.

- The office space development and leasing have witnessed steady upward growth, while the residential segment has recorded below moderate growth.

- Pre-leased Commercial Real Estate (CRE) provides high rental yield in the range of 6% to 8% combined with the expectation of reasonable capital gains would take the gross IRR to 9% to 12% in long term.

- Low to medium risk, with stable debt-like return during the entire holding period along with lease accelerations, makes it an attractive investment option.

- The total warehousing space has been estimated to be 68 million sq. (739 million sq. ft.) in 2019 for the manufacturing sector and it is projected to grow at a CAGR of 5% in the next five years to 86 million sq. m. (922 million sq. ft.) by 2024. - With e-commerce players expanding operations across the country, there has been a corresponding rise in demand for warehouse space from these companies in both tier I and II markets.

- Co-living is a new-age, shared economy business enabled by technology, proving affordable housing solutions to the migrant urban youth in the age group of 18-35 years of both students and working professionals.

- The co-living segment is expected to offer a business opportunity of 1lakh Cr. by 2023 as demand for shared rental space is rising. 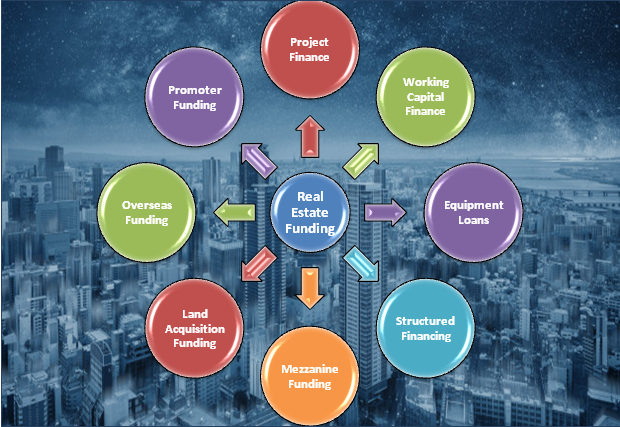 The graph below shows the growth trend of Physical assets for the last five years. The line is on the upward direction, indicating a growth in the physical asset acquisition over the years. 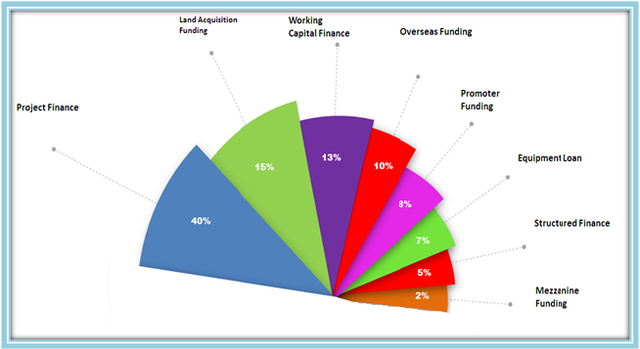 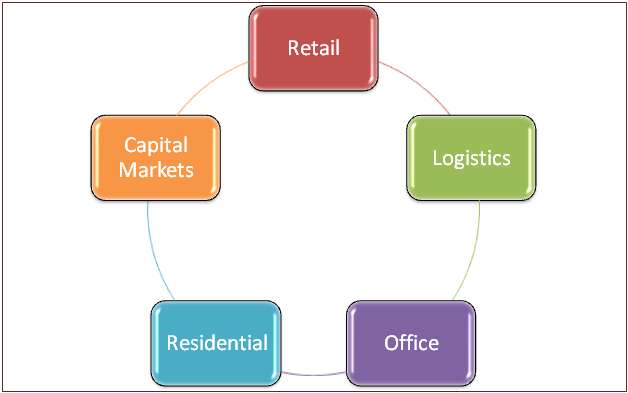 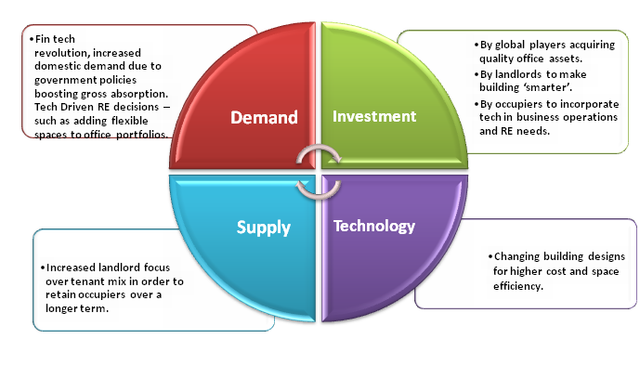 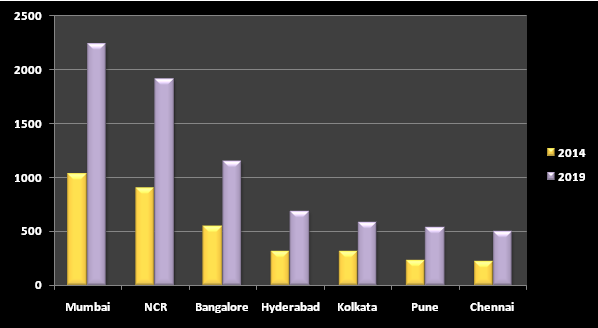 Convergence of Online and Offline Platforms:

India is one of the fastest-growing e-commerce markets in the world, with millions of new internet users joining the bandwagon every year. The total internet audience in India is estimated to surpass 635 million online users by 2021. Also, developers are trying to leverage the competitive advantage of brick-and-mortar experience and have adopted various approaches for creating these experiences, including investment in creative design, events and common spaces.

Tenant strategies such as pop-ups by these e-commerce players are becoming more commonplace to create an element of surprise and draw in traffic. The figure above shows the estimated percentage share of online retail sales in India and its estimated value in USD.

As the sector gets more organized, HNI and non-resident Indians (NRI) investors are realizing that instead of taking on the pain of directly buying, managing and maintaining commercial properties, they can also participate through REIT.

The year 2019 was remarkable for the logistics market in the country. Following the expected trend, 3PL, e-commerce and engineering and manufacturing drove demand during this year.

Revenue and Profit for different Sectors:

PSB in agreement with Magicbricks to e-auction:

The Government of India along with the governments of the respective states has taken several initiatives to encourage the development in the sector. The Smart City Project, where there is a plan to build 100 smart cities, is a prime opportunity for real estate companies. Below are some of the other major Government Initiatives:

- Under the PradhanMantriAwasYojana (PMAY) Urban, more than 8.09 million houses have been sanctioned up to May 2019.

- Under the PradhanMantriAwasYojana (PMAY) Urban 1,427,486 houses have been sanctioned in 2017-18. In March 2018, construction of additional 3,21,567 affordable houses was sanctioned under the scheme.

In order to revive around 1,600 stalled housing projects across the top cities in the country, the Union Cabinet has approved the setting up of Rs. 25,000 cr. (US$ 3.58 billion) alternative investment fund (AIF). Finance Minister Ms. Nirmala Sitharaman said that the AIF will act as a special window to offer priority debt financing for completion of projects in the affordable and middle-income categories. The funding will only be received if the project is registered under the Real Estate (Regulation and Development) Act or RERA.

This move by the government is expected to give significant relief to home buyers as well as businesses. There are several types of funds under this category such as real estate funds, private equity funds (PE funds), funds for distressed assets and so on. According to the initial estimates by the finance ministry, it is expected that the AIF will be targeted at completing around 1,600 stalled real estate projects that include over 458,000 unfinished units. The target is at affordable and middle-income housing units; thus, the fund will address residential properties in Mumbai that are priced below Rs 2 cr. (US$ 0.29 million).

The cap for other metros like Delhi, Kolkata, Bengaluru, and Chennai, among others, has been set at Rs 1.5 cr. (US$ 0.21 million) and for smaller cities; it is at Rs 1 cr. (US$ 0.14 million) per unit. Leading banks and Investment Corporation will provide an additional fund of Rs 15,000 cr. (US$ 2.15 billion) to the Category-II AIF, which will be managed by the bank itself, along with the initial contribution of Rs 10,000 cr. (US$ 1.43 billion) from the government which will act as a sponsor.