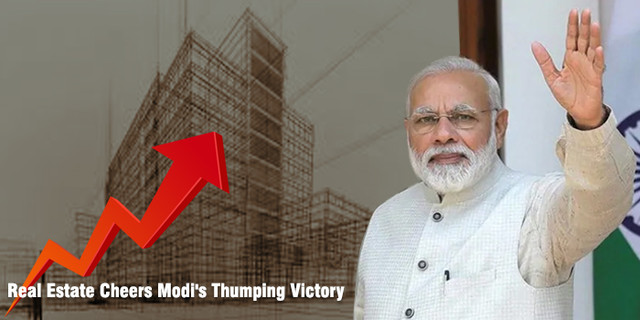 Citing initiatives such as “RERA”, “GST” as well as ‘Affordable Housing’ all into action by ending in 2022, the sector expects institutional-specific investments to a high double-digit as much as $10 billion by the end of fiscal 2019.

The potentiality of reforms also being reflected in form of investments reaped by the Real Estate sector, out of the institutions’ total investment of $30 bn during 2009-2018,$20 bn was being invested between 2014-2018. In the same period, the foreign direct investments share more than doubled to 70% in 2018 from 32% in 2009.

During Modi's first term, the government gave a decisive impetus unfolding all-around infrastructural development, great policy overhauls like DeMo, GST and RERA, amended previous Acts such as Insolvency and Bankruptcy Code (IBC) along with other envisioned schemes including Housing for all, 100 Smart Cities, AMRUT Cities, Make in India and so forth.

With Modi 2.0, we see fairly robust momentum most recently would not only maintain a pace of growth but also escalate speed. Some of these governments' initiatives undoubtedly will sail through to the conclusive stage of their journey.

Disclaimer : Information contained and transmitted by us are for information purposes only. All views and/or recommendations are those of the concerned author personally and made purely for information purposes. Nothing contained in the articles should be construed as business, legal, tax, accounting, investment or other advice or as an advertisement or promotion of any project or developer or locality. Pioneer Property Management Ltd. does not offer any such advice. No warranties, guarantees, promises and/or representations of any kind, express or implied, are given as to (a) the nature, standard, quality, reliability, accuracy or otherwise of the information and views provided in (and other contents of) the articles or (b) the suitability, applicability or otherwise of such information, views, or other contents for any personâ€™s circumstances. We shall not be liable nor shall be held responsible in any manner for any action taken based on the published information (whether in law, contract, tort, by negligence, products liability or otherwise) for any losses, injury or damage (whether direct or indirect, special, incidental or consequential) suffered by such person as a result of anyone applying the information (or any other contents) in these articles or making any investment decision on the basis of such information (or any such contents), or otherwise. The users should exercise due caution and/or seek independent advice before they make any decision or take any action on the basis of such information or other contents.